As the Wien-Raaber Bahn reached the feet of the Semmering pass and later on, as the pass railway (the world's first-ever mountain railway) was developed, the flourishing, wet, lumber-heavy valleys in the area attracted loads of investors. Neusiedler AG wanted to build a paper mill along the Schwarza river to exploit the dense pinewood forests of the area and therefore the planning of a standard-gauge railway from Südbahn's Payerbach-Reichenau station to Hirschwang (the village at the feet of the Raxalpe, to house the paper mill) and a branch to Prien, both electrified by DC, was started. 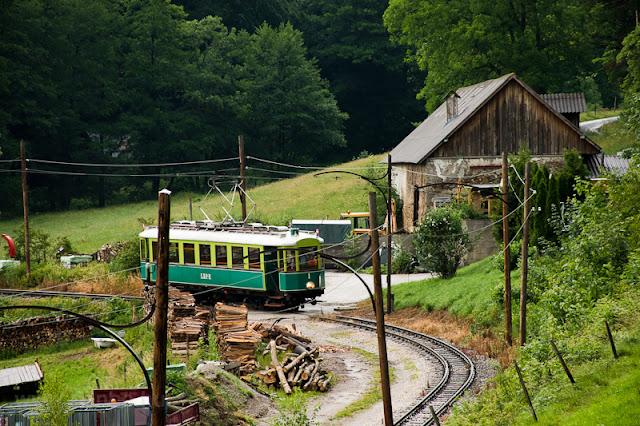 Photo of the Week: Narrow-gauge Freight on the Lillafüred Forestry Railway

The D02-508 is a class Mk48 diesel-hydraulic locomotive that serves on the 76-cm-gauge Lillafüred Forest Railway (Lillafüredi Erdei Vasút). Though freight service is discontinued and only tourist excursion trains are operated on the two-line network building trains need some goods cars and therefore sometimes train enthusiasts can organize colourful photo charters with them. On this occasion the Mk48 pulled the freight and the photographers travelled in a separate train hauled by a class C50 small diesel locomotive:
Read more »
Posted by Benbe at 07:07 No comments:

Photo of the Week: Small Locomotive, Big Use

The SBB Cargo Eem 923 027-7 is a dual-mode (diesel+electric, 15 kV 16.7 Hz+25 kV 50 Hz AC) light freight locomotive manufactured by Stadler Rail (Bussnang, Switzerland). A total number of 30 were built in 2011-2012 and their duties include regional freight trains and light shunting. This example was photographed at the Bern-Lötschberg-Simplonbahn's Spiez station. The versatile little locomotives have a maximum speed of 100 km/h and a power output of 1500 kW on electric and 360 kW on diesel power.

The Situation of Train Travel in Hungary

Currently, Hungary is going through gradual release after a semi-serious lockdown state, however, some restrictions are broken down more difficultly than others. Similarly to some other East-Central-Europe states, Hungary managed to cancel most of the capabilities of the Covid-19 virus to spread and the only major concern is the infection of many hospital workers and the internal spreading of the infection across different parts of the hospital, resulting in patients of other illnesses to be returning home infected; often to homes for the elderly or homeless shelters. Because of the very low level of infections in the outside world, the government's primary concern is the re-introduction of the virus through foreign visitors, so for any Hungarians returning from abroad a two-week quarantine at home is ordered. 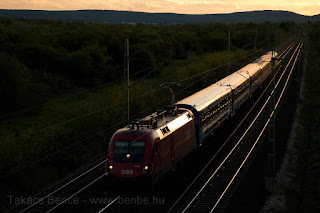 Daily commuting is possible to some of the neighbouring states like Austria (without limits) or Slovakia (to 30 km distance from the border station). Other international travel is mostly prohibited or requires quarantine on both entry to the foreign country and re-entry home. Five designated states can have free business trips.
Read more »
Posted by Benbe at 23:20 No comments:

Photo of the Week: CFF Viseu

CFF Viseu de Sus is a narrow-gauge forestry railway situated in Northern Romania, in the Carpathian Mountains. In the warm half of the year, every weekend tourist steam trains take over the valley of the Vaser river and there are some occasional winter runnings as well. On weekends the railway still serves the original purpose, transporting lumber and lumberjacks. The excursion trains visit about half the length of the railway from Viseu to Paltin. Most steam locomotives used were at Resita or Reghin in Romania as a variant of the Hungarian MÁVAG class 490 design.
Posted by Benbe at 21:45 No comments:

A colourful railroad before it went out of service

The beginning of the year is always problematic for me as a teacher to find time for writing. Now that we are practically locked down due to the Corona virus it is time to go on a trip in our imagination by a train instead of actually taking one. The best way to stay safe is to stay at home.
If I had to travel in my head then an obvious choice for me was a railway I could not travel on in real life anymore. This post is probably going to get rather sentimental, I hope you do not mind. Some railways I never even had the chance to travel on, some I missed out on before closure due to being obsessed with other things or not believing they were really going to do that. This line is different: I spent a lot of time on this railway and I think I can be content with the number of photos I have of it, also with the interesting events and trains I had captured on it before it was closed in March 2007.
Normally the blog would invite you on some of the most spectacular railway journeys in Europe. Despite the hilly scenery, this line is not a huge spectacle; it may be nice compared to the lowlands that dominate Hungary, but you will not feel the urge to immediately go and walk the railway now that trains are absent. 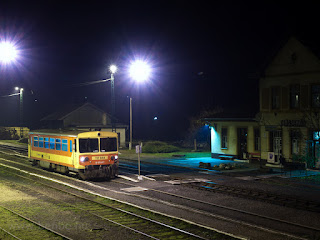 Benbe
Budapest, Hungary
I've been photographing trains for over ten years. I travelled around many countries of the continent and I'm fascinated by the diversity of locomotives that are used around the world. I run my own railway photography website, a youtube channel and a blog in Hungarian, all about trains.